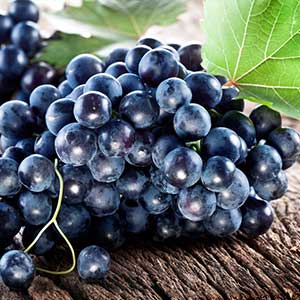 Nero d'Avola is one of the most renowned red grape varieties grown indigenously in Sicily.

The Nero d’Avola vine variety was imported by Greeks during their stay on the island; the "low-lying" training was also brought into use by them. Typically trained in espalier or tree fashion.

For the last ten years, wines made up of Nero d'Avola are being exported throughout the world; the vine makes them robust and full-bodied; the higher percentage of Nero d’Avola, the stronger and richer the wine will be.

For its typical qualities Nero d’Avola is used to cut light- to medium-weight wines, such as Merlot and Cabernet Sauvignon.

As a whole, each area of origin within Sicily’s production has its own distinctive features: the Western area is marked by a higher concentration, harshness and toughness; the central area is denoted by a sharp taste of red fruits, and the eastern area provides a more refined taste, with an aftertaste of dried fruits.

Many winemakers have recently started producing wines by blending Nero d’Avola with other vines marked by a more internationalized taste and obtaining such blends as Nero d’Avola - Syrah, Nero d’Avola - Cabernet Sauvignon, Nero d’Avola-Merlot, with truly refined and exotic results.

The Nero d'Avola varietal is traditionally grown in the borough of Avola, a town located in the province of Siracusa, with evidence dating back to the 15th century. In particular, this region is characterized by a mild climate in winter as well, partly due to the Monti Iblei, mountains shielding the area from north and north-west winds. This is a region of mostly flat plains and sparse low hills which ensures an exceptional production, both in terms of quality and quantity.
The Nero d'Avola varietal's growing area has rapidly extended to the neighbouring towns  (Noto, Rosolini, Pachino, Ispica and Vittoria) to include regions in the province of Caltanissetta and Trapani (1968).
Prior to the restructuring of vineyards which took place in 1955-1960, one of the areas Sicily was divided into was known as "del Nero d'Avola e del Frappato", which corresponds to the provinces of Siracusa and Ragusa.