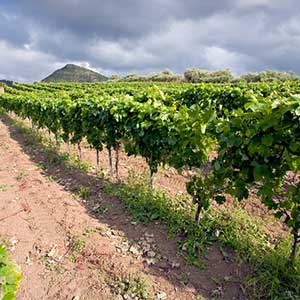 The region wherethe Nero d'Avola has its origins corresponds with the current town of Avola, in the province of Syracuse, with traces of its existence since the fifteenth century. This region benefits from a moderate climate even in winter, thanks to the morphology of the Iblean mountains. This climate is able to guarantee an exceptional production, both in qualitative and quantitative terms.

Almost the region in which it produces the Nero d'Avola has spread to nearby cities (Noto, Rosolini, Pachino, Ispica and Victoria) to affect areas of the province of Caltanissetta and Trapani (1968).
Prior to the restructuring of vineyards of 1955-60, one of the areas in which it was divided Sicily was called "Nero d'Avola and Frappato", coinciding with the provinces of Siracusa and Ragusa.